As Muslims we accept the tenets of our faith because we know, without any shadow of a doubt, that the Lord of all creation knows that which is best for his own creation.  Any change, modification or non-adherence will not only cause the creation difficulties in this world, but also, as is our belief, cause difficulties in the next.

The recent speech[1] by the Chief Inspector of Ofsted, Amanda Spielman, is without doubt, consistent with a ‘crusade’ against Muslims and Islam which is currently being ‘fought’ by Her Majesty’s Inspectorate.  These are not my words, but the words of a teacher and union activist Doug Morgan of the National Education Union.

Many commentators have personalised the issue to the likes of Spielman, however that would be missing the true context.  Spielman is the current face of Ofsted, just as Michael Wilshaw was in January 2016, when he threatened to downgrade schools in relation to the wearing of the veil.  Spielman and Wilshaw are just well paid employees who carry out ‘Muslim-bashing’ as a very deliberate policy choice of the state.  These ‘thugs’ carry out what Spielman herself refers to as ‘muscular liberalism’ to try and beat out the Islamic identity of primary school children, under the pretext of countering extremism.  Like a pack of bloodthirsty wolves, they aim to disembowel school girls of their hijab, aided and abetted by the likes of the ‘The Times’ newspaper, St Stephens primary school in Newham and various sympathisers such as ‘so-called’ Muslim feminists and school governors.

However, as the whole school hijab furore roars on, it is ironic and very much interesting to see the battle which is currently being fought by many within the liberal west.  The very foundations of women’s rights and feminism in the West have well and truly been shook in the wake of all the recent allegations of abuse, victimisation and sexual assaults of women leading from the Harvey Weinstein and the Presidents Club shenanigans.  There is a general realisation that the overt sexualisation of women and their treatment as mere objects of desire has not only been a means of their ultimate abuse, but is also demeaning, degrading and disrespectful to women.  As a consequence, the Professional Darts Corporation has announced the end of using ‘walk-on girl’ during darts tournaments.  This has been quickly followed by Formula 1 who have called an end to the use of ‘grid girls’.[2]  Both these sports use scantily clad women as a mean of sexualised ‘decoration’.

For the Muslim female the hijab or headscarf is a means of modesty, which is fundamental to the faith.  However, this very simple piece of cloth is far more than this, and as such it is a means of:

At a time when women are coming out in their droves as victims of a society which portrays them as mere sexual objects of desire and organisations are recognising the errors of their ways – the highest educational body in the land, Ofsted, have seemingly learnt nothing.  However, their ‘crusade’ is not one which is based on rational thinking and of safeguarding young girls or women – theirs is one which is firmly rooted in ‘PREVENT’ and aims to drive out the Islam from Muslims.  With that in mind, where better to start this process of ‘re-education’, but in primary schools up and down the country. 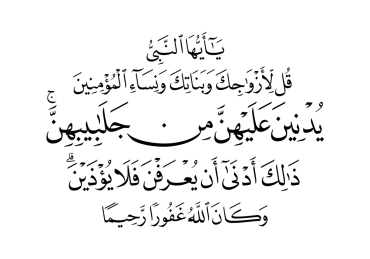 Women Wear the Veil because it says so in the Quran