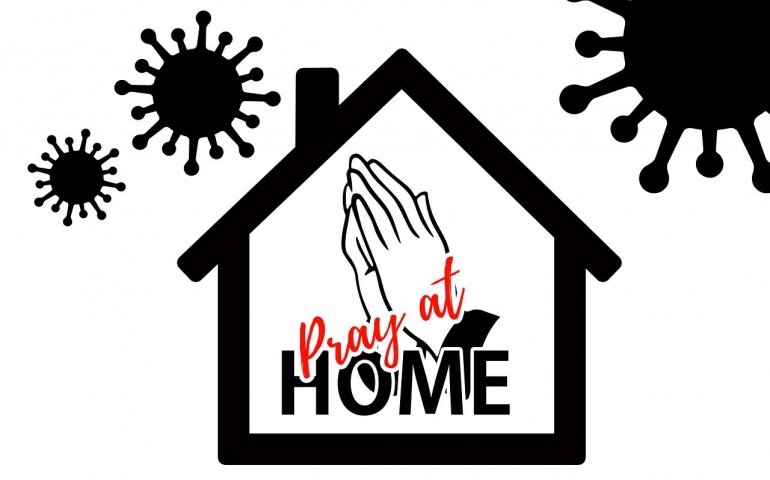 In the name of Allah, The Almighty, The All Powerful

The entire world is currently gripped with panic and fear. As Muslims, it is our belief that both adversity and prosperity are from Allah Almighty and that both can be a means to attain closeness to Allah Almighty.

“A believer is not affected by fatigue, illness, anxiety, worry, sorrow, pain or grief, or even the pricking of a thorn, except that Allah expiates his sins for that” (Ṣaḥīḥ al-Bukhārī, 5641).

This ḥadīth affirms that no matter how great and prolonged a calamity, a person’s responsibility is to endure it with patience. There is no need to panic or despair, rather one must have faith in Allah Almighty and take the necessary precautionary measures depending on the nature of the calamity.

In the context of Coronavirus (Covid-19), the UK Government has asked everyone to stop non-essential contact, and for those with symptoms to self-isolate at home. As a result of this, most people will be remaining within the confines of their homes for at least a few weeks until the spread of the virus is significantly stemmed. Accordingly, the vast majority of Muslims will also not attend the Masjid for Friday and other prayers. Whilst this is a matter of huge regret and sorrow, as it poses significant financial, emotional and spiritual challenges, this must be contextualised and understood in light of the risks posed by this virus and the reward of enduring patience in such difficult times.

“There should be no harm or reciprocating harm” (Musnad Aḥmad, 2865; al-Mustadrak, 2345; the narration of al-Mustadrak is ṣaḥīḥ)

“The sick animal should not be taken to the healthy” (Ṣaḥīḥ Muslim, 2221).

Generally, commentators mention this is a reference to mixing sick cattle with healthy cattle (Aʿlām al-Ḥadīth, 3:2139; al-Tamhīd, 24:200). However, one interpretation of a similar narration with a slightly different wording is that it is a reference to a person affected with leprosy (or another similar illness) (Sharḥ Ibn Baṭṭāl, 9:450).

In another narration, the mother of believers ʿĀʾishah (d. 58/678, may Allah be pleased with her) said,

“I asked the messenger of Allah ﷺ about the pestilence/plague, so the messenger of Allah ﷺ informed me that it is a punishment which Allah sends upon whomsoever He wishes, but He has made it a mercy for the believers. So, anyone who is afflicted in the pestilence/plague, and remains in his home maintaining patience expecting the reward from Allah, and knowing that nothing will befall him other than what Allah has written for him, he will attain similar to the reward or a martyr (Musnad Aḥmad, 26139).

“As mentioned by [the scholar] Dāwūdī, the ḥadīth of ʿĀʾishah, may Allah be pleased with her, refers to the person who does not die from it. As for the one who passes away in it, then he is undoubtedly a martyr” (al-Tawḍīḥ, 19/648).

“He who bears the aforementioned qualities shall attain the reward of a martyr even if he does not die in the pestilence/plague” (Fatḥ al-Bārī, 10/94).

Therefore, when an epidemic befalls an area and a person remains in his town or in his home for greater good and remains alive, he shall receive the reward of a martyr, subject to the following conditions:

1) Exercising patience and not complaining or questioning Allah’s decision. The Prophet ﷺ said:

2) Intending and expecting reward from Allah Almighty. Those self-isolating and adopting social distancing measures should specifically make an intention to avoid harming others and acting upon on the ḥadīths mentioned above.

3) Firmly believing that nothing befalls a person except what Allah has written. This is a fundamental point of creed which should be firmly embedded within the hearts and minds, that the ultimate controller of illnesses and diseases is Allah Almighty, and that nothing occurs without His will and power. Precautionary measures are taken in light of Islamic teachings; however, this does not mean that total reliance and belief is placed on these measures. Precautionary measures cannot stop an illness if Allah Almighty has destined otherwise and vice versa. If a person has such conviction, then he shall attain the reward of a martyr. This does not mean that a person does not adopt precautionary measures or that illnesses do not transmit from one person to another. As far as the ḥadīth of the Prophet ﷺ,

is concerned, it means that no illness has the inert ability to infect another person except with the will of Almighty Allah (Aʿlām al-Ḥadīth, 3:2118; Maʿālim al-Sunan, 4:233). It is perfectly possible for someone to interact with an infected person and not be infected if Allah has decreed this. One must therefore firmly believe that in reality Allah Almighty is the one who decides who is to be infected or otherwise. This ḥadīth does not mean that Allah Almighty has not created diseases that cannot spread, with His will, from one person to another. This is clear from the many ḥadīths where precautionary measures have been advised. Other explanations have also been mentioned by some recent ḥadīth experts, however, the preferred meaning is as mentioned above.

Therefore, for those who in self-isolation should adopt these three qualities and have hope of attaining the reward of a martyr.

A Masjid in every home

1) Develop an itinerary for the day and incorporate the below therein.

2) Determine and fix an area in the home where the entire family can congregate to perform Ṣalāh.

3) Perform congregational Ṣalāh with the entire family including the females (refer below for rules). It is advised that you fix the times similar to the time in the local Masjid. Those who are self-isolating within a room due to symptoms should perform their Ṣalāh individually.

4) Allocate up to 30 minutes after one of the Ṣalāh wherein the entire household should recite the Quran. My respected father Mufti Shabbir Ahmad said, “All those who are at home due to the Coronavirus should spend their time wisely and start memorising the Quran. Some of our scholars memorised the entire Quran in jail.”

5) Allocate up to 15 minutes after one of the Ṣalāh and share Islamic discourses from a book or online resource to the entire family.

6) Listen to one lecture a day via the Masjid receiver system or the internet.

7) Go to sleep early, wake up for Tahajjud Ṣalāh shortly before Fajr Ṣalāh time begins, and perform Fajr Ṣalāh at the beginning time if you plan to sleep thereafter.

8) Along with other masnūn supplications after Ṣalāh, all family members should read the following supplication, it should also be read at other times:

9) Fix a time in the morning and evening to read the following two supplications thrice and once respectively:

‘In the Name of Allah, by whose Name nothing in the earth or the heaven is harmed, and He is the All-Hearing, the All-Knowing’ (Sunan al-Tirmidhī, 3388; Sunan Abī Dāwūd, 5088).

‘O Allah, I ask You for wellbeing in this world and the hereafter. O Allah, I ask You for forgiveness and wellbeing in my religious and worldly affairs, and my family and my wealth. O Allah, conceal my faults and keep me safe from my fears. O Allah, protect me from the front and from behind, and on my right and on my left and from above, and I seek refuge in Your greatness from receiving unexpected harm from beneath me.’” (Sunan Abī Dāwūd, 5074; Sunan Ibn Mājah, 3871).

10) Limit the time spent on social media and the internet and spend quality time with the family.

Reward of performing Ṣalāh in the Masjid

“When a servant [of Allah] falls ill or travels, reward is written for him similar to his deeds when he was local in good health” (Ṣaḥīḥ al-Bukhārī, 2996).

Anyone who is self-isolating in a room within a house should perform Ṣalāh individually as mentioned above. All other members of the family should perform congregational Ṣalāh in the home, with an bālig (mature) male as the Imam.

In relation to the standing position, the following principles should be noted:

The following table illustrates this with some examples:

If the room is small, the males can stand to the right and left of the Imam with their heels slightly behind the Imam’s heels and the females behind in a separate row.

If the Adhān has been performed in a Masjid in the local area, it is not necessary to perform Adhān at home. If it is performed, care should be taken not to disturb neighbours. Either way, before starting congregational Ṣalāh, the Iqāmah should be given by the Imam or any of the family members. Perhaps ask the children to take turns.

The Ṣalāh must be led by a bālig (mature) male. It is likely that the current situation continues through to the month of Ramaḍān. In this scenario, if the only ḥāfiẓ in the household is a young boy, there is no harm in acting upon the view of some ḥanafī jurists who permit a non-bālig to lead Tarāwīḥ Ṣalāh. However, in this scenario, an adult must lead ʿIshāʾ and Witr Ṣalāh (refer to our earlier answer for further details).

Those who do not possess any symptoms should only leave the home when absolutely necessary, because it is highly probable that a person is infected without any symptoms or with mild symptoms. The Prime Minister’s instructions announced this evening at 8.30pm must be followed.

Finally, we all have a role to play in supporting all those who are directly or indirectly affected by this crisis. Many charities have launched campaigns which can be supported via online donations. It is recommended to give Zakat in advance when there is a need.

Likewise, we should be mindful of the needs of our neighbours and share food and other products as necessary with the appropriate precautions.

In relation to shopping, we should avoid panic buying and traders must not hike up the prices. During such occasions, we need to come together and where possible reduce the prices or at least maintain the same prices of goods. It is, ultimately, our deeds and actions that can quickly bring an end to this pandemic.

May Allah Almighty protect us all.

Eid Salah in a town with no Masjid 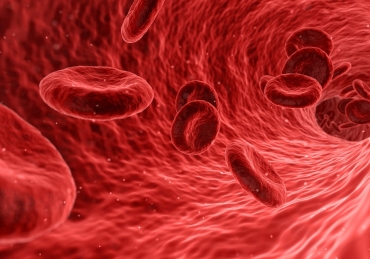 Can you donate Plasma for Covid-19? 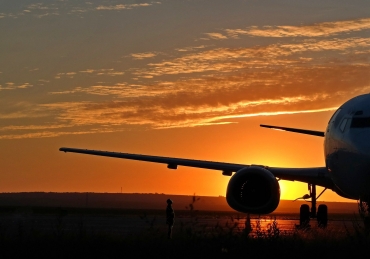 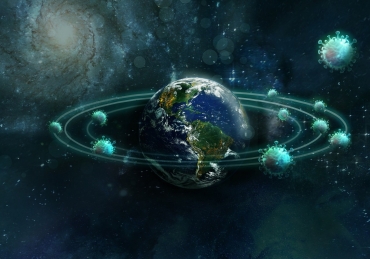 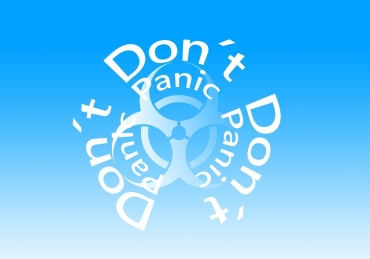 Covid-19: Status of performing Salah in the Masjids and restrictions